Writing the story was always fun with Stef. It was an escape for us both, wishing that we could be in that world sometimes – though dark and dangerous, the ability to become something supernaturally gifted, resolving the episode with some extravagant battle was so exciting, enticing, amazing! We were kids growing up together through college. Rather than a car, we started Plays. It was great working in California – experimental theatre was all around us. From black box to fringe in NoHo, sex and ethnic swapping roles in traditional Shakespeare Plays at Santa Monica, to lovely masquerades on the rooftops of Koreatown – we never ran out of inspiration. Being an Artist never felt so good…and expensive. We were friends with amazing art agents who hopped couches, producers who lived and traveled in their car, and couples who got engaged and bunked in the dorms (stretching their years in college loans by switching majors from an associates to masters degrees) – all working hard to someday get their break in the business. We were all dreamers, and we fought for it all.

While Project Italy was still being written, Stef and I would draw the characters and our favorite scenes. Sometimes we would create scenes we wish could’ve fit into the story a few chapters back, and would revel in ideas of “what if’s” during afternoon tea. We would say that someday this dreaming might end, but we always flailed our hands, and said that day might come, but the future has yet to come. “Que cera!” we would mutter, as we toast to a cup of Pu-erh sipping its hot leaves between our lipsticks, at a cafe, in the Holiday Inn, during Anime Expo, Cosplayed as characters I no longer recognize, among other Jack Sparrows and Escaflowne cat girls.

It was college. It was weird, but we were artists. And we dreamed all the way through. 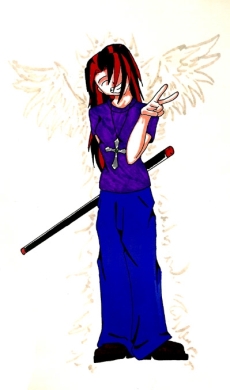 This entry was posted on May 16, 2014 by Gene Corde. It was filed under Uncategorized and was tagged with art, college, cosplay, dreamers, project Italy, writing.