Long ago, we produced Theatre Plays. We did rehearsals, we did live readings, preview nights, world premieres – you name it, we did it. As most businesses have certain handicaps to struggle through, ours was always in documenting our shows. After writing, casting, producing, directing, and hosting, you tend to leave hitting the record button on the back burner. You think more about the audience and reviewers over the future reminiscence you would want to savor tomorrow. So…we lost many of what we had, sometimes our programs and flyers would run out, and so…yeah. Nada.

Luckily, on 2011, we had a Media Manager, and he gave us unlimited volunteers to help us produce our media content – filling our Flickr account with hundreds of photos. Unbelievable, beautiful, and still an amazing collection to return to. Our thanks go to Kyle Niitsuma, Daniel Irvin, Candice Koeth, and Elysia Funtiveros (whose creative eye captured these great pictures of Fate Pendulum’s Project Italy – presented at the Pasadena Central Library, on December 2011). 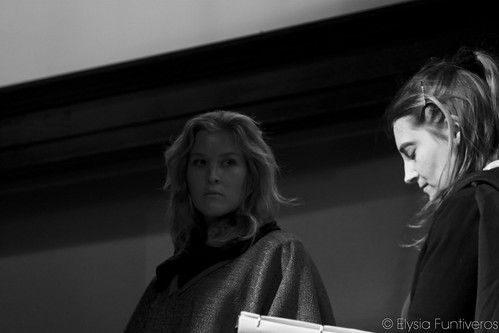 Vida: the character that grew up

They’re are some things that you seem to hold on to that only you could really understand. Then there’s that moment when you think to yourself “Holy Cow, this thing is a decade old!” I wish I could say this in regards to my fixation with the character Vida, but sadly it’s grown from a hot mess to about a similar experience of a  mother watching her daughter fly the coop for college.

Like most teenage girls, I created a heroine that reflected everything I wish I could ever be and then some. There was a deep secret inside of me every time the words projected on the screen that I wanted to eventually become Vida. Vida, or at the time ‘Stef’ began as a therapeutic outlet in an exchange of emails with my best friend on hot summer days. Unlike the regular email exchange, he had created several different aliases to be his comic characters, he was after all a freshman in college ready to take on his Theatre minor. The replies to those characters I would soon learn was me doing a little acting myself.

When I started to ge

t older and my reading taste grew, I started to realize that the character that I had created of Stef was a gem in my little treasure trove of writing. I loved her because she could be honest and impulsive, and that ideal of what was a heroine started to change. Upon releasing the first play of Project Italy to the theatre world, the character of Stef was an experience of being reborn. Until this day, I think the thing that makes Vida a character of charm is the fact that she can be candid with her emotions and reaction to the events around her. This is something I think is either overly salted or rarely touched in the world of fantasy genres that I would like to think that I created a character that the reader/watcher could dive into the world without the disappointment of her turning into a ‘Mary Sue’ of a creature.

After the first play we started to write more stories involving these characters. Those stories have become the epic that Fate Pendulum has been coined to this day. That best friend had become my boyfriend, Producer, co-writer, and recently husband. While my life was changing the teenage girl dreams that were an ideal version of myself was farther from the truth. After calling her the character of Stef for so long, we had to go our ways and the name of Vida (meaning life and death) had been adopted. I can say that these early stages of the Fate Pendulum story were where  she really began to take her true form. In this story she is a teenager soon to be in her twenties, and she goes through her own form of growing pains. This is a human side to the story where we see her grow up into her role of heroine.

I like to think of Vida and I being good old friends. We’ve had a cup of tea and a keyboard or journal between both our worlds for years. Except we’ve reached a point in our relationship where she’s holding me to my promise to her even after several years had passed. I need to tell her story. Thank you for all who support this blog, because in a way, you are holding me to my word.  For this truth I am blessed.

eturning to our first project is like reminiscing about your first kiss. The feeling was fresh, new, and between innocence and curiosity, your heart couldn’t feel more settled that this first kiss was yours to keep. The script was raw, the cast was young, the crew even more, and breaking even was something only one could dream for. On April 15, 2005, Project Italy had its world premiere at the Gene Bua: Acting For Life Theatre! It was independently produced, it was raw, and experimental. It was ours to share, and it felt good. Since then, we’ve never turned back.

oday, I write to continue that same feeling. Project Italy was an experience to enjoy. To let it fade out on curtain couldn’t really mean the end. And so, I wrote. We wrote. Stefanie and I couldn’t stop collaborating. While we were producing more shows around NoHo, in 99 seat theaters, the next story turned into episodes, books, and at last, as the epic. They were unpublished, almost produced, but the stories were always calling us to keep writing. Revisions turned to rewrites, weeks turned to months, and after a year or so, we took the liberty to write a brand new version of the whole epic.

From page one, we revamped the characters, we beat them up, and tasted every tear, every love, and every ounce of blood those spiral bound pages flipped for, each character gained a new scar, a precious moment, a depth that would make Dean Koontz proud. Ink-filled were our hands, and we couldn’t be anymore happy. And since, we have only released the story to the public every other year, on stage, on page, and any media possible for a limited time.